Back to Case Studies
Materials and Technologies in the Age of Transition: The Byzantine, Sasanian and Islamic Near East
Published on July 11, 2019
Written by Moujan Matin and Alain George Wolfson College, University of Oxford

On 10th and 11th July 2019 a symposium ‘Materials and Technologies in the Age of Transition: the Byzantine, Sasanian and Islamic Near East’ was convened at Wolfson College, University of Oxford. The symposium included eighteen speakers and chair panels from the UK, France, Greece, Denmark, and Germany who specialise in different artistic media from the Middle East, East Mediterranean, and North Africa.

This one-and-a-half day symposium was divided into six main sessions:  Day 1: i) Glass, ii) Ceramics, iii) Metallurgy; iv) Mining and Stonework; Day 2: v) Textiles, and vi) Manuscripts, with each session focusing on the development of materials during the transition from late antiquity to Islam. Each session featured lectures by two invited speakers and a discussion panel facilitated by the panel chair. The symposium received excellent participation with approximately 70 attendees, 12 presentations and engaging and productive discussions.

The symposium was the first of its kind, bringing together experts from different disciplines of archaeology, archaeological sciences, and history to discuss the subject. The event provided a rare opportunity to address the development of materials and technologies from various perspectives considering the major effects of the Byzantine-Islamic transition and proposed various frameworks for collaboration across fields that rarely interact.

The first day focused on inorganic materials. In the Glass panel, chaired by Beatrice Leal, St John Simpson talked about a distinctive Sasanian glass industry with primary evidence of production from fieldwork in Iraq as well as the southern Caucasus. Nadine Schibille discussed glass compositions during the eighth to tenth century CE with a focus on well-dated samples of early Islamic glass weights from Egypt. 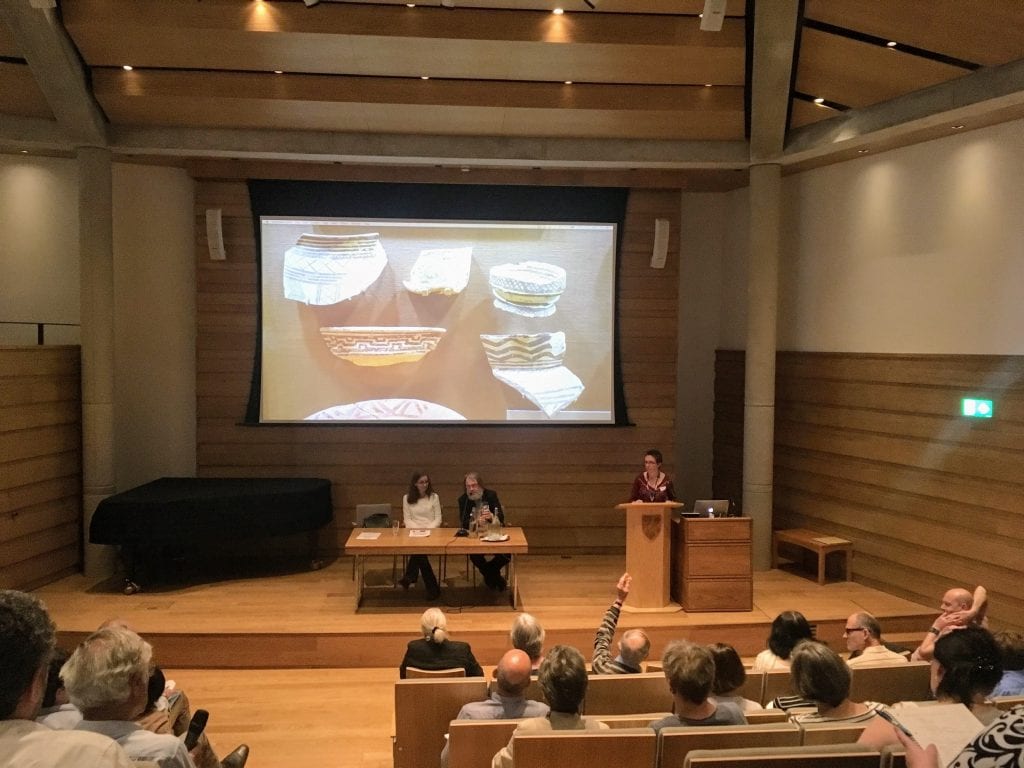 In the Ceramics session, chaired by Oliver Watson, Moujan Matin discussed major technological revolutions in the development of glazed ceramics and the technological interactions between glass and glaze making during the Byzantine and early Islamic periods; and Seth Priestman spoke about the economic and cultural implications of the developments in early Islamic ceramics and their trade across the Persian Gulf and Indian Ocean.

In the Metallurgy panel, chaired by James Allan, and the Mining and Stonework panel, chaired by Jeremy Johns, various aspects of the production and provenance of crucible steel, copper alloys, and silver dirham coins were discussed respectively by Brian Gilmour, Matthew Ponting and Stephen Merkel. The last lecture of the day was given by Elise Morero, who focused on rock crystal carving techniques and supply sources of raw rock crystals in early Islam.

The second day was themed around organic materials, with the two panels focusing on Textiles and Manuscripts. The Textile panel, chaired by Jonathan Shepard, featured lectures by Anna Muthesius and Hero Granger-Taylor on silks and the evolution of loom technology. In the Manuscripts panel, chaired by Alain George, Matthew Collins presented recent advances in the use of DNA for the study of manuscript parchments; and Georgios Boudalis discussed the technology of the codex in late antiquity in relation to other industries, such as clothing.