Back to News
Safavid Persia in the Age of Empires.
Publications
Published on June 7, 2021
Written by BIPS

Safavid Persia in the Age of Empires. 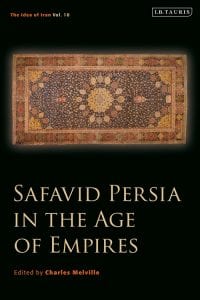 The sixteenth and seventeenth centuries saw the establishment of the new Safavid regime in Iran. Along with reuniting the Persian lands under one rule, the Safavids initiated the radical transformation of the religious landscape by introducing Imami Shi’ism as the official state faith and in this as in other ways, laying the foundations of Iran’s modern identity.

In this book, leading scholars of Iranian history, culture and politics examine the meaning of the idea of Iran in the Safavid period by examining contemporary experiences of both insiders and outsiders, asking how modern scholarship defines the distinctive features of the age.

The volume is published by Bloomsbury/I.B. Tauris and it is available for purchase here.

Charles Melville is Emeritus Professor of Persian History, Emeritus Fellow of Pembroke College and Founding Director since 1999 of the Shahnama Project. He is also President of the Islamic Manuscripts Association and Vice Chair of the Academic Council of the Iran Heritage Foundation. He has travelled widely in Iran and Central Asia. His main research interests are in the history and historiography of Iran in the Mongol to Safavid periods and Persian manuscript culture. His current research project is on the illustration of history in Persian manuscripts. Since 2018, he is President of BIPS.