Back to Case Studies
Visiting the Takkiyya Mu’avin al-Mulk in Kermanshah
Published on March 31, 2022
Written by Nahid Assemi

I had the good fortune of receiving a travel grant from the British Institute of Persian Studies to travel to Iran, visiting the Takkiyya Mu’avin al-Mulk in Kermanshah, with the view to taking professional photographs of the place for publication of my book dealing with the monument.  I had been waiting to make the trip for upwards of six months. The problem of Covid 19 pandemic, restriction of movements, closure of borders, non-availability of flights and other related issues had prevented the trip being made.  With the opening of borders and the possibility of travel to Iran, I therefore took the opportunity of booking the first available flight to Iran in the hope of fulfilling my mission and left England on the 15th of August.  What I had not taken into account was the very grave situation of pandemic in Iran, with high rate of infection and mortality due to non-existence of vaccines at the time which meant absence of personnel within organisations, inevitably leading to slow response to applications.  I had also not taken into account the take-over of the new government which meant people I knew and relied on for help were no longer in office.

The decision to travel to Iran in August therefore proved to be unwise.  This was the height of the pandemic in Iran with a ten-day lockdown imposed on the country the day after my arrival with all governmental organisations closed.  After a long 10-day wait, I managed to secure an appointment with the Head of the Museums and National Monuments of the Sazeman-e Miras-e Farhangi-ye Kishavar (Miras) to present my manuscript and ask for a letter addressed to the Sazeman-e Miras-e Kermanshah, allowing me to take photos of the Takkiyya with the help of a professional photographer.  The permission was granted and I was asked to collect copy of the letter which would be sent to Kermanshah, a week later.  By the time I collected the copy of the letter, a process that I hoped would take at most 3-5 days to complete had already taken 17 days of my time in Iran.

With a copy of the letter in hand, I rented a car to drive to Kermanshah (air travel restricted due to pandemic).  The day after arrival I visited the Miras of Kermanshah, presenting copy of my letter, asking for permission. A further three days of wait. In the meantime, I tried to find a professional photographer and visited the Takkiyya myself to take some photos myself.  Unfortunately, the Takkiyya, a popular tourist destination, always open to public was now closed, with no access possible except by permission.  As it was the month of Muharram, the season for commemorating the events of Karbala, for the purpose of which the Takkiyya had been built, it was strange for the place to be under lock and key.

Three days after my arrival, I received the answer to my request.  Permission was to be granted based on “regulations” prevailing at the time which meant that in effect the request had been denied.  A few months earlier, a lady fashion designer had chosen the space of the Takkiyya as backdrop to her advertising and marketing campaign with a short film of a model roaming around the space of the Zaynabiyya, without proper covering, with the film posted on Instagram.  This had caused outrage within the religious community of Kermanshah, who protesting at the profound disrespect towards a religious monument had occupied the Takkiyya, with banners and slogans, demanding explanation for allowing the reprehensible act to take place in such significant religious space, blaming the Sazeman-e Miras for the permission granted, with the judicial authorities of Kermanshah asked to investigate.

See links and photos below that have appeared in the Iranian media:

I tried to contest the decision, for my book was a well-researched scholarly account of the Takkiyya, one that brought the significance of the place to the fore, unfolding its many layers of meaning.  While this was appreciated by the Miras authorities, I was asked to postpone my project to a later time, when dust would have been settled and conditions more favourable.  In the event nothing could be done.  Had also ran out of time and money and had to surrender.  The Miras did however put at my disposition a few photographs that I especially needed.

I still intend to travel to Iran at a later date, and visit Kermanshah and the Takkiyya.  Looking from the street towards the forecourt, the place seemed to have been spruced up and undergone much “renovation”.  All joints of masonry and brickwork had been filled with new mortar, carefully applied, with dilapidated doors replaced or repainted.  It is only hoped the other spaces of the Takkiyya have not been subjected to the same degree of renovation as applied to the space of the forecourt.  My own old photos probably tell a better story.

Once again, my deep gratitude to BIPS for the grant and the opportunity of travel to Kermanshah. 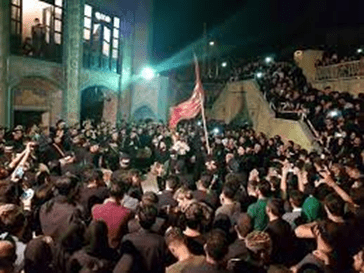 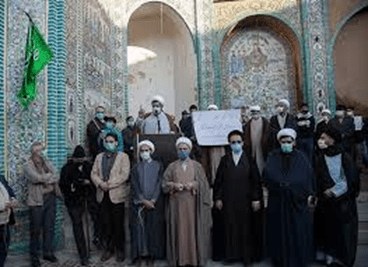